skip to main | skip to sidebar

We published the 8th edition of our annual "Trade Fairs in Asia" report this week. You can buy it on the BSG website. Here is the full press release along with some of the highlights from the report.

July 2, 2012 – Paris/Hong Kong: Growth of the trade fair industry in Asia was boosted in 2011 by strong increases in south-east Asia according to the eighth edition of UFI’s annual report on the trade fair market in Asia.

Overall, exhibition space sales grew by 2.6% last year. Net area sold by organisers in Asia reached a total of 15.9 million m2.  Of that total, almost 55% was sold in China and 12% was sold in Japan. The research was once again undertaken for UFI, the global association of the exhibition industry, by Business Strategies Group (BSG) in Hong Kong.

Growth was clearly highest in south-east Asia in 2011. Singapore and Malaysia were the fastest growing markets in 2011 - up 15% and 14% respectively. The exhibition market in the Philippines grew by 8.8%. Vietnam was the only exception to this south-east Asian trend, posting growth of just 1.2%.

The larger exhibition markets grew notably more slowly in 2011. Asia’s largest market, China, grew by 2.5%, while India posted an increase of 3.3%. Two other large markets, Korea and Hong Kong grew by 2.2% and 1.1% respectively.

Paul Woodward, UFI Managing Director, commented, “The exhibition industry in Asia continues to be a remarkably dynamic and fast-growing market. As the exhibition markets in the traditional, more mature economies have been faced with challenging economic conditions, the industry in Asia has continually managed to grow year after year."

"As a result, a rising number of international exhibition organisers are looking to participate in the growth in Asia. We are also pleased to see UFI's membership in Asia continue to grow along with the industry there. UFI now has 193 members in Asia - including 73 in mainland China and we anticipate that interest in the region will remain high."

This annual report has again been edited by UFI Asia/Pacific Regional Manager and BSG Managing Director, Mark Cochrane.  He commented, “Growth of the exhibition industry in south-east Asia outpaced the rest of the region in 2011 and we expect to see an extension of that exciting trend continue throughout 2012.”

“We are forecasting exhibition space sales at trade fairs in Asia to reach 16.3 million m2 sold in 2012. Although the south-east Asian markets are expected to be strong performers again in 2012, the key question will be how well the largest exhibition markets such as China and India will hold up in face of weak economic conditions in key export markets in Europe and the U.S. We anticipate that the growth of intra-Asian trade will largely offset the economic softness in Europe and the U.S.”

As an added-value service, each UFI member will be entitled to receive a four page executive summary of the research and to purchase the full report at a substantial discount.
Posted by Mark Cochrane at Saturday, July 07, 2012 No comments:

Mayfield Media Strategies (MMS), the specialist M&A brokers for the exhibition industry, is continuing to expand its international operations with the opening of an office in Singapore to manage its activities in South East Asia.

Following their success in internationalising the Turkish exhibition market, MMS are now turning their attention to the opportunities that the ASEAN region offers. . The combination of fast growing economies and an exhibition market, which is still relatively fragmented and un-developed, is fuelling a demand for acquisitions. Steve Monnington the founder and CEO of Mayfield Media said ‘We have noticed an recent increase in interest in the South East Asia market – although many of the economies are still small there is a fast growing middle class which is driving a demand for branded goods and the exhibition industry is looking to serve that. As an example, the IMF has forecast that Indonesia will be the 5th largest economy in the world by 2020. We expect to see an increase in the number of acquisitions and partnerships in the region in the next year’.

The Singapore operation will be led byIsabel Gonzalez who has been based in Singapore since 2009 and has many years of international business experience including previous roles at Kodak, the American Chamber of Commerce and the United Nations. Mayfield Media’s office in Singapore will work alongside their existing strategic partnership with Business Strategies Group which covers the whole of the Asia market including China, Hong Kong, S E Asia and South Korea.

Geographically renowned as the regional business epicentre, Singapore is the ideal location from which to deliver centralized support and intelligence in the South East Asia region.

More on Mayfield can be found here.

UFI Open Seminar in Shenzhen in 2012 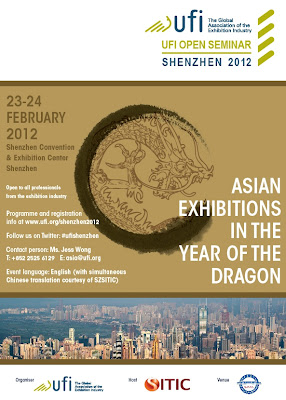 Since the inaugural edition in 2005, this event has been managed by BSG on behalf of UFI. This year's theme is "Asian Exhibitions in the Year of the Dragon" and we have a fantastic programme lined-up. The previous edition of the seminar in Bangkok attracted over 260 delegates and we expecting a large turnout in 2012 as well.

Check out the full programme details and register today! The early bird rate is available until 21st January.

Posted by Mark Cochrane at Thursday, December 01, 2011 No comments:

BSG is pleased to announce our new partnership with Mayfield Media Strategies. We will be working with Steve Monnington and Anna John to advise independent exhibition organisers in Asia who are interested in selling their businesses. Steve and Anna have a truly impressive track record in M&A advisory and we look forward to bringing that expertise to Asia.

Here is a list of some of the recent transactions in which Mayfield Media has played a role.


The full press release is below.

Mayfield Media Strategies and Business Strategies Group have formed a partnership to help exhibition organisers in Asia market themselves for sale to international purchasers.

Mayfield Media are the leading specialist acquisition brokers for the exhibition industry. Over the past 15 years, they have helped many independent organisers sell their businesses or set up joint ventures with international partners. Mayfield Media have facilitated transactions all round the globe including in the UK, Mainland Europe, Australia and the Middle East and are increasingly working with entrepreneurs in emerging markets such as Turkey where they have completed five transactions in the last couple of years.

Business Strategies Group (BSG) is the only market intelligence and strategy-consulting firm in Asia focused on business media, information and events. Based in Hong Kong and founded in 2000, its services include research, market intelligence, mergers and acquisition support and strategy development. BSG publishes regular reports on all aspects of B2B media in Asia.

Steve Monnington, Managing Director of Mayfield Media commented ‘We have been planning to establish our business in Asia for some time and we are delighted to be working with Mark and the team at BSG. The exhibition business has always crossed borders, but in recent years we have seen a dramatic increase the in the number of international acquisitions. Selling your company to a foreign buyer can be a daunting task, especially if the relationship will be ongoing. Our experience helps vendors maximize the price and to work out the right deal-structure to ensure future success. Combined with Mark’s extensive knowledge of the Asian exhibition market we are confident of delivering results.’

Mark Cochrane, Managing Director of BSG commented, ‘We are extremely pleased to partner with Mayfield Media. They have unmatched experience as an acquisition broker for the exhibition industry – particularly in emerging markets. The exhibition industry in Asia is the fastest growing and most dynamic worldwide. The combination of BSG’s Asian market knowledge and Mayfield Media’s transaction expertise will allow us to offer a great deal of value to independent exhibition organisers looking to sell their businesses.’

The partnership will deliver turn-key services for exhibition organisers in Asia looking to sell all or part of their companies – this will include a valuation, analysis of potential purchasers, preparation of an information memorandum, price negotiation and overseeing the legal and due-diligence process.

BSG and TSNN (The Trade Show News Network) have announced a strategic partnership that will include the launch of the TSNN Asia Exhibition News e-newsletter covering the exhibition business in Asia.

We are very pleased to be working with Rachel Wimberly, Stephen Nold and the rest of the TSNN team. You can subscribe TSNN Asia Exhibition News e-newsletter here.

Full details from the press release are available here.
Posted by Mark Cochrane at Tuesday, April 12, 2011 No comments:

UFI Open Seminar in Asia headed to Shenzhen in 2012 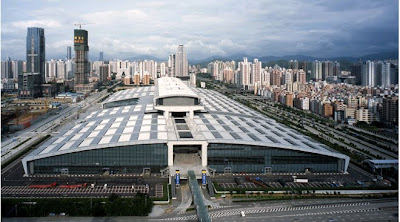 The 2011 UFI Open Seminar in Asia concluded in Bangkok on February 25th. The event reached a new record in terms of delegates (almost 260 in total). Thanks to our hosts, TCEB as well as all of the speakers, sponsors and delegates who made the seminar such a strong success this year.

The seminar concluded with the exciting announcement that the 2012 edition of the UFI Open Seminar in Asia will be headed to Shenzhen - specifically the Shenzhen Convention and Exhibition Centre.

BSG (which manages the UFI Asia/Pacific office and UFI Open Seminar in Asia) looks forward to welcoming you to Shenzhen and the 7th edition of this event next year!
Posted by Mark Cochrane at Wednesday, March 09, 2011 No comments:

UFI Managing Director commented, "We have been hoping for a long time to be able to bring the UFI Congress to Abu Dhabi and are really delighted that our 2012 event will be hosted by ADNEC. Abu Dhabi generously hosted UFI’s Middle East/Africa office for the past five years. So, we are really excited to be able to share with our 550 members in 84 countries the magnificent facilities and exciting developments there which we know very well. This will, we’re certain, be a really memorable UFI Congress, all the more special for being the first one we’ve held in the Arabian Gulf region."

The 2010 UFI Congress was held in Singapore last November and it attracted 475 delegates from more than 50 countries. The 2011 UFI Congress will be held in Valencia.

BSG manages the UFI Asia/Pacific office as well as the UFI Open Seminar in Asia.
Posted by Mark Cochrane at Tuesday, February 01, 2011 1 comment: